It might be too dramatic a claim to stake.
But people say a great cup of coffee can at times make or break a day.

In a world where everyone is either racing to get somewhere. Or rushing get away from somewhere else.
Single serve coffee pods are the demand of the day. Its been close to three decades since they first burst into the coffee arena. Since then, K-Cups have slowly and surely made their way into homes all across the world. Through time they’ve offered up options in beverages ranging from hot Chocolate, and green teas to fruit based drinks, lemonades and even cider.

Today however we’re here to walk you through some of the most tantalising flavours that Cappuccino K-Cups have offered up to the coffee community.

The Cappuccino, like many other caffeinated creations, is a piece of art when constructed correctly.
The one problem though, present since its invention. It took time and precision to assemble. That smooth shot, of steaming espresso with its captivating crema, teamed with a comforting layer of milk on the top and a sliver of froth to finish off.

Eventually people were willing to make daily trips to their local barista to get a cup that was just right to start their day. While the coffee market slowly got flooded with both manual and machine offerings to help brew a cappuccino at home. The one thing they took up more than others, was, once again, time.
And so the K-Cup came to the rescue. With a press of a button, the single serve pods offered up a cappuccino worthy of warring with a participant from a champion barista.
Don’t take our word for it. Speed through the list below and see the flavours and finesse offered up. Along with cappuccino, you might find some related ones like French Vanilla, Latte or Macchiato as well.

Striding in to start our list is Grove Square. Marrying the two soul-mates of the dessert world in their French Vanilla single serve K-cups. The Cappuccino, French Vanilla blend balances out the bitterness of the coffee but cutting through it with the velvety sweet vanilla.

Certified kosher, the blend is smooth and rich containing pure vanilla. It doesn’t need you to take the additional step of adding in any creamer. 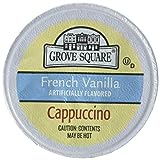 Grove Square Cappuccino, French Vanilla, 50 Single...
$22.55
Buy On Amazon If you click this link and buy something, we may earn a commission at no additional cost to you / Last update on 2020-10-21

Shooting through into the second slot is an offer from Victor Allen. A company that has been committed to the field of coffee for over four decades. Today they bring forth their single serve Salty Caramel Cappuccino mix. 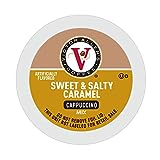 Victor Allen's Coffee Sweet and Salty Caramel...
$13.99
Buy On Amazon If you click this link and buy something, we may earn a commission at no additional cost to you / Last update on 2020-10-21

Trotting in third on our list is a caramel cappuccino blend presented by Barissimo. The Barissimo brand is the result of Aldi Inc dipping their toes into the coffee community. The brew is constructed by 100 percent premium Arabica beans.

The comfortingly creamy blend presents a perfect meld of caffeine with an undertone of caramel that runs through and hits just the right note at just the right places. And boy does it go down smooth.

Barissimo Caramel Cappuccino Coffee Drink Mix K-Cup...
$14.99
Buy On Amazon If you click this link and buy something, we may earn a commission at no additional cost to you / Last update on 2020-10-21

Flying through fourth on our list is Victor Allen’s once again. The classic French Vanilla is the flavour they offer this time.

Constructed from hundred percent Arabica beans, the mix flawlessly connects the creamy caramel with a tempting tinge of vanilla flowing through. 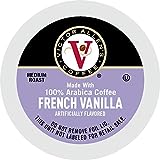 Victor Allen's Coffee K Cups, French Vanilla Single...
$26.99
Buy On Amazon If you click this link and buy something, we may earn a commission at no additional cost to you / Last update on 2020-10-21

And the repeat offender strikes our list again. This time Victor Allen is offering up a blend of their medium roast Caramel Macchiato.

Composed of one hundred percent Arabica beans. This blend draws a fine line in the sand. It doesn’t tilt too strongly towards the bitter or the sweet flavour profile. 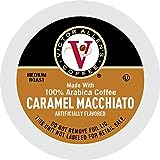 Victor Allen Coffee, Caramel Macchiato Single Serve...
$28.74
Buy On Amazon If you click this link and buy something, we may earn a commission at no additional cost to you / Last update on 2020-10-21

Barissimo barges into our list yet again. This time with their French Vanilla Cappuccino Coffee Cocoa. The blend intricately integrates the punch of caffeine with the frehness of vanilla to create a sweet and velvety cappuccino. The blend also has a surprise hint of nuttiness running through the beverage.

Barissimo French Vanilla Cappuccino Coffee Cocoa Pods 2...
$27.00
Buy On Amazon If you click this link and buy something, we may earn a commission at no additional cost to you / Last update on 2020-10-21

Offering the unique option of a touch of toffee added to your regular morning coffee is Indulgio, a company committed to classy coffee since 1979. The mix entering our list next is a smooth buttery cappuccino with a tantalising tease of sweet toffee running through the blend.

A treat for more than just your taste buds. Both naturally and artificially flavoured, the beverage has an aroma that would tempt even the most ardent tea drinkers out there to jump ship.

Indulgio English Toffee Cappuccino Single Serve K-cup,...
$49.98
Buy On Amazon If you click this link and buy something, we may earn a commission at no additional cost to you / Last update on 2020-10-21

Entering the competition in the eighth slot is the name that wears a crown in the coffee community. While the words Dunkin’ Donuts should be enough to get you to whip out your wallet. Take a seat and salivate while you learn why the blend has a cult following of its own.

The Dunkin’ French Vanilla Flavoured Coffee offers the authentic taste the brand has been swearing by for seventy years. The single serve pods contain a tantalising blend that comfortably merges the punch of coffee with just the right dose of Vanilla. The full bodied blend is composed of a medium roast of premium Arabica beans. 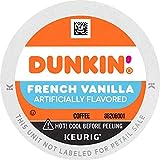 Nearing the end now with an offering from the tech giant itself. Solimo is an offshoot of Amazon that deals with everyday goods. And what could you want everyday more than a delicious cup of steamy coffee.

The light blend of creamy goodness contains real milk in its mix. It has a light undertone of caramel that flows through the blend. With everything contained inside, you do not need to add in a separate serving of milk at any time to enjoy the beverge. 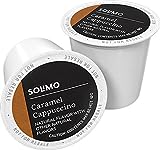 Solimo Cappuccino Single Serve Cups, Caramel, 24ct
Buy On Amazon If you click this link and buy something, we may earn a commission at no additional cost to you / Last update on 2020-10-21

Rounding off our list on a high we have a Vanilla Latte Cappuccino offered up by The Original Donut Shop .

The perfect companion for a cold winter day. These Vanilla Lattes are mouth-wateringly rich and creamy. The caffeine equivalent to a hug in a cup. The dark roast blend in the pods contains real milk and is one hundred percent Kosher and gluten free. 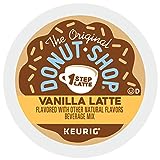 Before you get excited and loosen those purse strings to jump onto a purchase. There are a few things you should pay special attention to. Consider them as boxes to check before the final decision is made.

A cup of coffee enjoyed hot or cold is often a daily ritual for coffee drinkers in the world. In fact there are people that consume close to two or three cups of coffee a day. It is therefore important to keep an eye on that calorie count going up with each cup. It is common to come across cappuccino K-cups that hold anything between 50 to 80 calories. Anything pushing more than that deserves a second glance.

No Muss No Fuss

The whole point of opting for a single serve option for your daily cup of coffee is to ensure a faster and smoother process. If you find that the brand, or flavour you favour requires a lot more involvement that the simple steps of a K Cup brewer. It might be a hint to look elsewhere.

Don’t forget to look at the expiry and manufacturing dates whenever you are buying a eatable product. So it’s not just applicable to K-cups, but all other grocery items that are eatable things.

There’s a misconception held by many that anything quick and easy will lack quality. A stroll down this list will help them wrong. With more and more brands setting foot into the K- Cup community. We’re sure to see the rise of newer and more exciting flavours from both old and new names to the game. 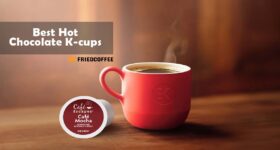 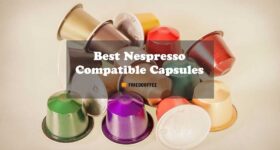 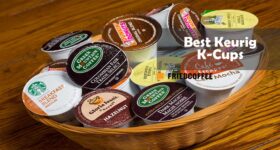 At FriedCoffee.com we invest a lot of time researching and gathering information to provide coffee lovers with one of the most informative resources when it comes to coffee and coffee equipment. In regard to some of the advertising/links featured on FriedCoffee.com, FriedCoffee is a participant in the Amazon Services LLC Associates Program, an affiliate advertising program designed to provide a means for sites to earn advertising revenue by advertising and linking to Amazon.com. However, all of the coffee related product reviews, opinions, coffee brewing guides, how to guides, coffee articles, and/or coffee equipment buyers guides featured within FriedCoffee.com are based on extensive research and contain the expressed opinions of Friedcoffee.com expert staff, our official product reviews, opinions of our writers, and/or our customer feedback and reviews in an effort to help consumers make the best choices for their needs when it comes to all things coffee related.